Warner has been treating sick trees for over 50 years. If you look to the left there are links to our websites on Citrus Trees - Palo Verde Trees – Pine Trees – Queen Palms and the Warners Tree Surgery Website. There is also a link to our YouTube channel.

Chalara ash dieback, which is caused by a fungus called Chalara fraxinea, causes leaf loss and crown dieback in affected trees, and can cause trees to die.

The disease was first detected in Britain in March in nurseries and recently planted sites, before being discovered in woodlands and forests.

Experts believe the fungus in mature woodlands has swept in from northern France and warn that little can be done to stop the wind-borne disease from spreading. 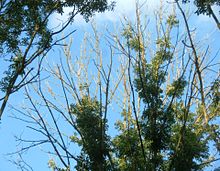 Hymenoscyphus fraxineus has two phases to its life-cycle: sexual and asexual.[8] The asexual stage (anamorph) grows in affected trees attacking the bark and encircling twigs and branches.[8] The sexual, reproductive stage, (teleomorph) grows during summer on ash petioles in the previous year's fallen leaves.[6] The ascospores are produced in asci and are transmitted by wind; this might explain the rapid spread of the fungus.[6] The origins of the disease are uncertain,[9] but researchers are investigating the theory that the fungus originated in Asia, where ash trees are immune to the disease.[10] Genetic analysis of the fungus Lambertella albida which grows harmlessly on petioles of the Manchurian ash (Fraxinus mandschurica) in Japan, has shown that it is likely to be the same species as Hymenoscyphus fraxineus.[11]

Teams from The Sainsbury Laboratory (TSL) and the John Innes Centre in Norwich sequenced the genome of the fungus in December 2012. The sequence has been published on the website OpenAshDieBack and offers clues to how the fungus infects trees. The study has uncovered toxin genes and other genes that may be responsible for the virulence of the fungus. In the long term researchers aim to find the genes that confer resistance to the pathogen on some ash trees.[12]

Trees now believed to have been infected with this pathogen were reported dying in large numbers in Poland in 1992,[13] and by the mid 1990s it was also found in Lithuania, Latvia and Estonia.[14] However, it was 2006 before the fungus’s asexual stage, Chalara fraxinea, was first described by scientists, and 2010 before its sexual stage was described.[13] By 2008 the disease was also discovered in Scandinavia, the Czech Republic, Slovenia, Germany, Austria and Switzerland.[15] By 2012 it had spread to Belgium, France, Hungary, Italy, Luxembourg,[16] the Netherlands, Romania, Russia, Britain and Ireland.[17][18]

There are few official figures available, but the disease has caused a large-scale decline of ash trees across Poland,[19] and the experience there suggests that in the long term "15 to 20 per cent of trees do not die, and show no symptoms."[20] In 2012, the disease was said to be peaking in Sweden and Denmark, and in a post-decline (or chronic) phase in Latvia and Lithuania.[9] The disease was first observed in Denmark in 2002, and had spread to the whole country by 2005.[21] In 2009 it was estimated that 50 per cent of Denmark's ash trees were damaged by crown-dieback,[21] and a 2010 estimate stated that 60–90% of ash trees in Denmark were affected and may eventually disappear.[22] The disease was first reported in Sweden in 2003.[23] A survey conducted in Götaland in 2009 found that more than 50% of the trees had noticeable thinning and 25% were severely injured.[23]

A Danish study found that substantial genetic variation between ash trees affected their level of susceptibility.[24] However, the proportion of trees with a high level of natural resistance seemed to be very low, probably less than 5%.[24] A Lithuanian trial based on the planting of trees derived from both Lithuanian and foreign populations of European ash found 10% of trees survived in all progeny trials to the age of eight years.[25]

Wilting of leaves caused by necrosis of the rachis

Small lens-shaped lesion on the bark of stem

Large lesion extending along a branch

Initially, small necrotic spots (without exudate) appear on stems and branches. These necrotic lesions then enlarge in stretched, perennial cankers on the branches, wilting, premature shedding of leaves and particularly in the death of the top of the crown.[27] Below the bark, necrotic lesions frequently extend to the xylem, especially in the axial and paratracheal ray tissue.[28] The mycelium can pass through the simple pits, perforating the middle lamella but damage to either the plasmalemma or cell walls was not observed.[29] The disease is often chronic but can be lethal.[17] It is particularly destructive of young ash plants, killing them within one growing season of symptoms becoming visible.[30] Older trees can survive initial attacks, but tend to succumb eventually after several seasons of infection.[30]

The disease can be confused with another disorder known as "ash dieback" which has been known for many years and is widespread in the UK.[31] The disorder causes crown dieback in mature trees. The cause is unknown but it is thought to be a mainly physical rather than biological condition.[31]

There are currently no effective strategies for managing the disease, and most countries which have tried to control its spread have failed.[10] The removal of trees in infected areas has little effect as the fungus lives and grows on leaf litter on the forest floor.[10] Research at the Swedish University of Agricultural Sciences suggests that the deliberate destruction of trees in an infected area can be counterproductive as it destroys the few resistant trees alongside the dying ones.[32] One approach to managing the disease may be to take branches from resistant trees and graft them to rootstock to produce seeds of resistant trees in a controlled environment.[32] A Lithuanian trial searching for disease-resistance resulted in the selection of fifty disease-resistant trees for the establishment of breeding populations of European ash in different provinces of Lithuania.[25] However, the process of restoring the ash tree population across Europe with resistant trees is likely to take decades.[32]

Ash dieback in the United Kingdom

The fungus was first found in Britain during February 2012 at sites that had received saplings from nurseries in the previous five years.[13] A ban on imports of ash from other European countries was imposed in October 2012 after infected trees were found in established woodland.[33] On 29 October, Environment minister David Heath confirmed that 100,000 nursery trees and saplings had been deliberately destroyed.[10][34] The government also banned ash imports but experts described their efforts as "too little too late".[35] The UK Government emergency committee COBR met on 2 November to discuss the crisis.[36] A survey of Scottish trees started in November 2012.[37]

The Forestry Commission has produced guidance and requested people report possible cases. A free mobile phone application, Ashtag, is available to help report and identify cases.[36] Developed by the University of East Anglia it will help conservationists target infected areas.[38] Comparisons have been made to the outbreak of Dutch elm disease in the 1960s and 1970s.[39] Currently it is estimated that between 90% and 99% of the 80 million ash trees in the UK will be killed by the disease.[40]

On 9 November 2012 the United Kingdom Government unveiled its strategy. Environment Secretary Owen Paterson announced that it was now acknowledged that the disease was here to stay in the UK and that the focus would now be on slowing the spread of the disease. Young and newly planted trees with the disease would be destroyed; however, mature trees would not be removed because of the implications for wildlife who depend on the trees for their natural habitat. The strategy unveiled by Mr Paterson included:

In March 2013 the Environment Secretary Owen Paterson announced that the United Kingdom Government is to plant a quarter of a million ash trees in an attempt to find strains that are resistant to the fungus responsible for ash dieback.[42]

In February 2016 the BBC program " Countryfile" presented an anecdotal report of enhanced resistance to Ash dieback following soil treatment by injecting "BioChar" - a type of charcoal. Twenty trees had remained free of disease over 3 years during a severe infestation of the surrounding trees. [43][44]

In December 2016, writing in Nature Dr Richard Buggs reported that the common ash (Fraxinus excelsior)had been sequenced for the first time and UK specimens appeared more resistant than Danish ones.[45]

On 12 October 2012 the Department of Agriculture, Food and the Marine confirmed the first recorded instance of the fungus in Ireland, at a plantation in County Leitrim.[46] Legislation was introduced in both Northern Ireland and the Republic of Ireland on 26 October banning the importation and movement of ash plants from infected parts of Europe.[46] By 23 September 2013, a survey conducted by the Irish Government revealed that the disease had been identified at ninety-six sites across the Republic of Ireland.[47]

I hope you found this page about Ash Tree Diease useful. If you have any questions about Ash Tree Disease please contact our Tree Service to schedule an appointment. We have been treating sick ash trees for over 50 years. We currently serve, Mesa, Gilbert, Chandler, Scottsdale, Phoenix and all of Maricopa County.